On December 31st, 2016 at 23h59m59s, a positive leap second will be inserted into the UTC time. It may cause some deviation of GNSS receiver which is with GLONASS signal tracking.

This issue affects only GLONASS-enabled receivers. GLONASS tracking will be temporarily interrupted on receivers operating during the introduction of the leap second on December 31st 2016. Receivers powered-up after the introduction of the leap second that do not have a current almanac will also temporarily have difficulty tracking GLONASS satellites. An almanac will not be available on start-up if the receiver has not been used in 90 days or if the almanac has been cleared manually by the user. GPS and BeiDou tracking will not be impacted, and receivers will continue to compute a position using the GPS and BeiDou constellations. And GLONASS tracking will return to normal once a new GNSS almanac is automatically downloaded from the satellites by the receiver.

Hi-Target has made every effort to ensure all of our receivers will work normally through the event. To make sure the receivers can deal with GNSS time system correctly and provide high accurate performance as usual. We recommend you to do the following procedures:

1 Receiver should have no issues at leap second introduction if its GNSS mainboard firmware meets the requirement as below. If you cannot confirm what GNSS mainboard version your receiver is, a 15 minutes’ static collecting is recommended for receivers to update a new GNSS almanac after 00:00:00 UTC on 1 January 2017.

2 For receiver with earlier GNSS mainboard version:Receiver may lose tracking GLONASS at 00:00:00 UTC on 1 January 2017. After the first booting, please reset the mainboard once and do a 15 minutes’ static collecting for receivers to download a new GNSS almanac, then the receiver functionality will return to normal.By the way, we recommend you to update your receiver firmware to the latest to gain a better performance and user experience. 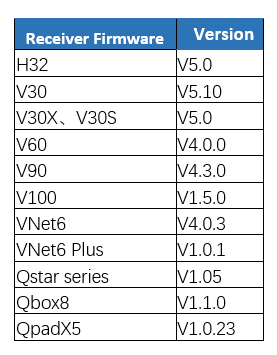